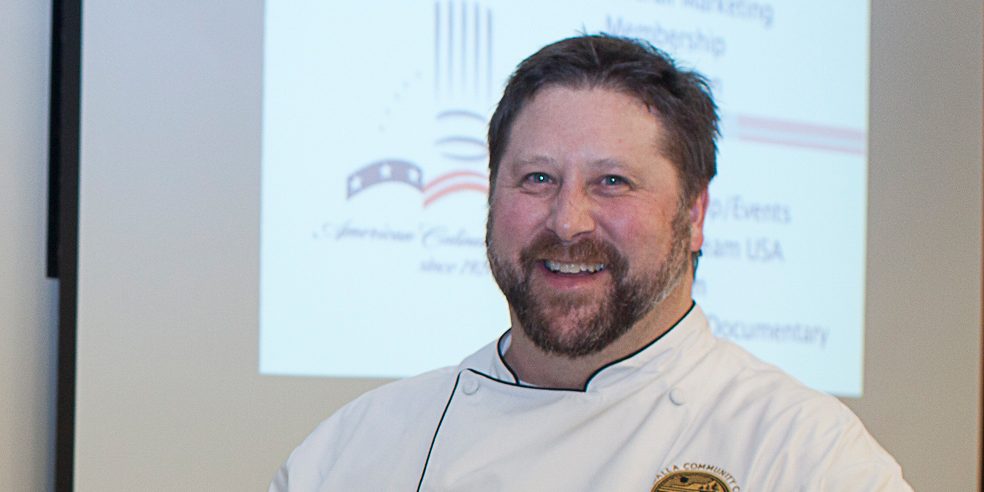 Jay Entrikin came to Walla Walla Community College in September 2004 as a culinary instructor. Jay’s interview process involved a “cooking demonstration” for the selection committee where he was asked to create a two-course meal from a “mystery box” of protein and vegetables. He impressed the interview committee with his meal of a “crispy sweetbreads” salad (Sweetbreads are the thymus gland of a steer) with roasted hazelnuts, goat cheese and sherry vinaigrette. The second course was a pan-roasted chicken “airline” breast with natural jus, sautéed green beans with walnuts and cheddar-whipped potatoes. Jay was hired as a teaching chef at WWCC and has been “wowing” students and college staff ever since. In 1994 Jay graduated with honors from Western Culinary Institute and began working as a line cook at the Painted Table in Seattle, Washington, a restaurant known for its contemporary “fusion” cuisine. Jay was the sauté chef at the Painted Table and had the distinct pleasure of preparing a meal for Bill and Melinda Gates during his time at this restaurant. In 1996 he moved to Portland, Oregon where he was the working chef at Assaggio’s, a restaurant specializing in regional Italian cuisine. At Assaggio’s Chef Jay learned the many nuances and subtleties of regional northern and southern Italian cuisine. At The Heathman Hotel, in Portland, Oregon, Chef Jay spent considerable time under the tutelage of Phillipe Boulot, a French master chef, known for his knowledge and skill of taking classical French cuisine and adding a distinctive Northwestern flair. Chef Jay’s extensive background in many different culinary and hospitality venues lends greatly to the instructional excellence of the Culinary Program at WWCC.

In August of 2011 Chef Jay was invited to compete in an “Iron Chef” style competition co-sponsored by the Northwest Wine Country Chapter of the American Culinary Federation and the Benton-Franklin County Fair. Eight chefs from throughout the local region were invited to compete over a five day period. This event took place at the Benton-Franklin County Fair in the Tri-Cities. Two chefs competed per day and at the end of the week the two chefs with the greatest number of points met on the final Saturday night of the fair to determine the top “Iron Chef” of this competition. All produce and meat were donated through the local Farmer’s Markets and each chef had exactly one hour to come up with an entrée not knowing what the protein would be. Walla Walla Community College’s Chef Jay was one of the top two finalists for this competition. Each chef had a sous chef to assist them in the preparation and they had exactly one hour to create this entrée. The meat chosen for the competition was Elk Ribeye, a tender piece of meat harvested from farm grown elk. Chef Jay chose to prepare a pan seared Elk Ribeye steak with Sauce Béarnaise, accompanied by a garlic-truffle potato cake and a grilled ratatouille salad. The judges loved Chef Jay’s entrée and how it was presented. He received the top award by being named the “Iron Chef” of this event. This month Chef Jay was recognized by the Northwest Wine Country Chapter of the American Culinary Federation as with the “Chef of the Year” award. Congratulations to Chef Jay for this award and recognition of his culinary skills and abilities! Walla Walla Community College is proud of have the caliber of chef and the excellent instructional capabilities that Chef Jay brings to the culinary program at the college.

Big Honors for our Culinary Arts Students!
May 8, 2012
Recent Posts
Go to Top