Their Hearts Are in the Kitchen 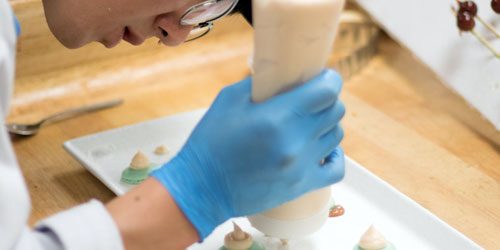 Everybody eats, but not everybody cooks. Many of us abandoned our cooking careers when we outgrew making mud pies. Fortunately, many other budding cooks persisted.

“My parents were really wonderful cooks, and that was how I fell in love with cooking,” says Chef Jay Entrikin. “I grew up horsing around in the kitchen. In seventh grade when I was taking French class I did a report on Bûche de Noel, and I actually baked one, with my Mom’s help.”

Not every young cook gets such encouragement. Culinary student Dong Hyuk Kim, who likes to be called Josh, remembers that when he was growing up in Seoul, South Korea, his parents were both working teachers. Because he was often home alone with his younger brother, he cooked for both of them. “I was interested in cooking since I was eight or nine,” he says.

Pastry chef Jennifer Truitt Contreras may have inherited the baking gene from her grandmother. “My Dad was a park ranger and police officer,” she recalls, “and my Mom was an EMT firefighter. Cooking really was not in my family at all. But my Grandma was known for her pies. And I always baked as a kid, mostly our family’s brownie recipe.” What these three food professionals have in common is WWCC’s Wine Country Culinary Institute, from which Contreras graduated in 2009, where Chef Entrikin is currently the acting director, and where Kim is a student.

The success of the program and its graduates can be attributed to its state-of-the-art facility, and to the highly skilled and experienced faculty it has been able to attract.

And Chef Entrikin, who began his culinary career at Red Robin, went on to graduate from the Western Culinary Institute in Portland. While in school he worked at Huber’s Cafe, Portland’s oldest restaurant, and then interned at the Painted Table in Seattle. After graduation he worked at Portland’s Assaggio, where he learned traditional Italian cuisine, and at the iconic Heathman Restaurant, learning classical French cuisine from Chef Philippe Boulot. Kim, who entered the program with plenty of restaurant experience in Korea, knew a lot about working with fish and sushi. But when he came to Walla Walla to live with his uncle and aunt, Steve and Hea-Kyung Dalke, they didn’t always think his food tasted good.

“At that time I only knew how to cook Korean food, not American food. And I’m a creative person, so I substituted a lot of American ingredients for traditional Korean ingredients,” he recalls.

He credits the culinary program with his developing palate and skills. “One of the great things about this program is that I’ve been able to learn about a lot of ingredients,” he says. “Things like leeks, spring onions, we don’t use those in Korea. And I’ve learned how to use many herbs and spices, and whole grains. Before I came here I didn’t like curry, or cilantro, or avocado. But after I experienced those flavors here, my palate has changed, now I like them.”

“And I really like doing catering with the program,” he continues, “because I can actually cook with the chefs, and watch them and learn from them.”

In cooking it’s the hand-on experience that makes the difference. Following a quarter of intensive pastry and baking studies in the program, Contreras did an internship at Walla Walla’s Colville St. Patisserie. The Patisserie hired her after graduation and she worked there for four years, making their tarts and specialty desserts. “I really credit the Patisserie and David Christensen, the chef/owner, with teaching me a lot of what I know now,” she says.

When she and her husband Jorge moved to San Diego she worked at the D Bar restaurant making  high-end desserts, then at the Bake Sale Bakery, where she got back to her pastry roots, baking muffins and cookies.

In 2016, missing their families and the Pacific Northwest, the couple  moved to Portland, where she now works in the large production kitchen of Elephants Delicatessen, making cakes and specialty cupcakes.

Portland’s food scene is another common thread. Kim dreams of working in a high-end restaurant there, or in Seattle. And Entrikin moved from Portland to Walla Walla in 2004, and became the program’s second chef instructor.

“The wine scene was taking off here,” he recalls. “I just had a feeling that I should get in on the ground floor, because wherever there’s great wine there’s great food.”

“The caliber of our program has changed drastically over the past 14 years. For the better, of course,” he adds. “Now we can hold our curriculum up against any culinary program, even the big ones.”

Big Honors for our Culinary Arts Students!
May 8, 2012