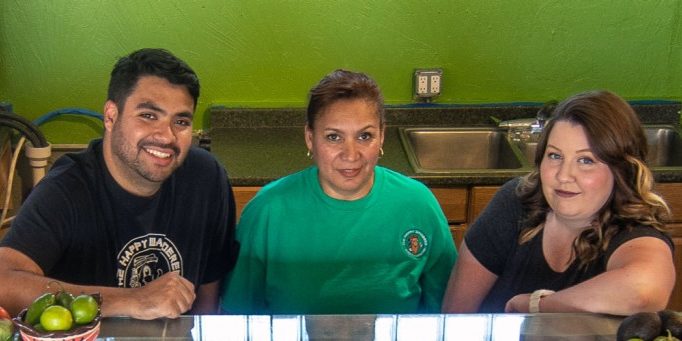 Sometimes success just runs in the family. One such family gave us Ari Lopez, a WWCC graduate and largely unsung hero of the local culinary scene.

Lopez is the executive sous-chef at Providence St. Mary’s, where he is responsible for turning out 900 meals a day for hospital patients, staff, and members of the community who come to eat there because the food is so good. While hospital food generally has a bad reputation, Lopez is doing everything he can to change that. “We use locally-sourced ingredients whenever possible,” he says. “We always have vegetarian options, and we even make our breads in-house.” His staff also provides the food for the Meals on Wheels program and for the Juvenile Justice Center. In his spare time he operates the Happy Wanderer food truck, and is preparing to launch the Happy Wanderer as a sit-down restaurant, slated to open this fall.

“My parents were often working two jobs each when I was growing up, so I spent a lot of time alone,” he remembers. “My Mom would leave me snacks, but starting when I was about seven I would sneak into the refrigerator and take a steak or a pork chop that my parents had planned for dinner, and create my own thing.”

But for Lopez, preparing those purloined steaks and chops didn’t translate easily to a life of cooking. In high school he thought about going to culinary school, but his parents wanted him to pursue what they thought of as a better career.

“My parents went to college in Mexico. My Mom’s a nurse who worked at St. Mary’s and now has her own home health care business, and my Dad studied hotel management, then worked for Broetje for many years in the shipping department. So it was really hard for them to see me going into a restaurant kitchen. They thought I would be washing dishes and scrubbing floors all my life.”

Wanting to please his parents, and thanks to Broetje’s excellent educational benefits, after graduating from Wa-Hi in 2006 Lopez attended WWCC, then WSU, earning degrees in criminal justice.

“I thought I would be a prosecutor,” he recalls, “because I’ve always been for fairness and justice. But then I just couldn’t see myself being happy living that life.”

While in school he worked as a dishwasher in the St. Mary’s kitchen, where the director of the dietary department was the Lopez family’s neighbor, Ruth Blair. Lopez credits her with his dive into the world of professional cooking.

“Ruth made an appointment for me with the WWCC culinary program, and she dragged me there for the interview,” he says. ”And when I was accepted into the program she bought me the uniforms I needed, with her own personal money.”

He remembers his first day in the program as overwhelming. He and his wife Amber had just gotten married, and he had just gotten a promotion at the hospital, to the kitchen steward position, doing all the ordering and stocking. Then the chef at the hospital quit a week before culinary school started. By observing the chef, Lopez had grasped the basics of ordering, creating menus, and working with local farmers, so he volunteered to take over as chef.

That’s when his family’s high-octane work ethic really kicked into gear. “The first week of school I went into the hospital at 4:00 a.m. and did the ordering. I wasn’t actually cooking, but I was managing the cooks, as well as creating the menus for the patients and for our cafeteria,” he remembers, with a hint of disbelief

He was at school by 7:00 a.m., and after school he raced back to the hospital and washed dishes. On weekends he worked as the diet office clerk, making sure that every patient on a special diet got what they needed. He did this, seven days a week, throughout culinary school. Meanwhile, his mother, Matilda Muñoz, had been dreaming of opening a restaurant herself, in addition to her home health care business. “My family thought that was crazy,” Lopez says, “and so as a compromise, we decided to buy a food truck.”

And so the Happy Wanderer came to Walla Walla from its home in Portland. Off to an unpropitious start, Lopez and Muñoz were driving out of Portland in a heavy rainstorm when the truck’s windshield wipers flew off, one by one. And before they made it to Pendleton the truck lost an axle.

“That was a real low point,” Lopez says. “But we got it fixed. Our first event was the plant sale at Frog Hollow Farm, and now we do all the food truck nights. On those nights we sell over 450 tacos, and my Mom makes every single one of those tortillas by hand.”

Still, although the farm-to-table Mexican food truck was a great success, Muñoz wasn’t satisfied. Finally the mother-son team made the decision to open the Happy Wanderer as a restaurant. They found an existing restaurant space across from Andy’s Market, and began extensive renovations. All in their free time, as her job as owner of Matty’s Home Care, and his as executive sous-chef at St. Mary’s, are as demanding as ever.

His no-shortcuts approach will continue in the new Happy Wanderer restaurant, where Lopez plans to have everything made from scratch. “Our food is authentic farm-to-table Mexican,” he says. “There’s nothing in our kitchen that’s from cans. We get our meats from Carniceria El Sol, and our vegetarian choices include a soy chorizo taco that is really popular. And we want to start working with the Walla Walla Roastery. Amber came up with a great drink, the horchata macchiato. The Happy Wanderer is all about fresh, local, creative, and affordable.”

Big Honors for our Culinary Arts Students!
May 8, 2012